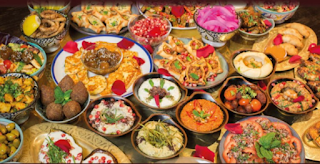 There can be no feast without an abundance of food, preferably accompanied by wine, raki, beer or herbal brews and teas. For since the invention of fire, food has become a collective experience which has to be shared. The way we have evolved has a lot to do with the way we started preparing and consuming our food. Our own bodies are the biological products of cooking. But food is not just material sustenance but a cultural depository of tastes accumulated through history, layer over layer. Food is also the finest example of international exchange; can you imagine Italian food without tomatoes or the Maghreb without harissa? Yet there where no chillies, chocolate, potatoes and tomatoes in the old world before the brutal conquest of the new world. These ingredients may well be the only positive legacy left from a genocidal conquest. Yet even the conquestadors could not resist being seduced by the spices and flavors concocted by the Mayas, the Aztecs and the Incas. Food is a cultural exchange. Ingredients from different cultures can blend in a way which enhances diversity. Nobody can resist the smell of a pot cooking, irrespective of cultural boundaries and religious divides. Through this exchange often encouraged by the seductive appeal of taste and smell, home grown foods evolve and change but still retain a distinct texture. Immigrants often bring with them new tempting smells but unlike Mc Donalds and coco cola, they tend to enrich what is already established. But the cultural exchange is only part of the story. The other fascinating story is that related to the act of cooking. For cooking is akin to witchcraft. The flavors and herbs we put in the pot can actually change the mood and humors of those who enjoy them, both in the act of preparation and in the act of consumption. And it all comes round through the magic of science: the sheer action of heat, air and earth on base ingredients which are elevated to new levels. The transformation and blending of ingredients is nothing short of an alchemy which often transforms the frugal in to the sublime. There is also magic in the chemistry taking place when food hits the taste buds. Smell also triggers our personal memories especially those related to childhood. But even the most delicious food would lack flavor and taste if consumed in a solitary environment. For it is the feast which turns food in to a sensual experience. It draws us closer to our loved ones. Sure over the past century food has fallen victim to mass production, factory farming, the fast food industry and big retail chains, which have undermined diversity and imposed a sterile uniformity. It has also fallen victim to vanity and the domestification of private life in the nuclear family and taken away from the neighborhood. It has broken apart by rigid seating and cutlery arrangements, which undermine the whole concept of feasting. Eating on cushions on the floor is more conducive to sharing and feasting than sitting on a high chair. A feast has to be messy, joyful and excessive. It has to include numerous plates and flavors. It is no wonder that feasting and food are so intertwined. So in a time of social distancing, it is imperative not to forget the joys of feasting, something which should fill us with revolutionary hope. For reclaiming the joys of sharing, slow cooking, celebrating locally grown ingredients and opening up to an exchange of diversity is an integral part of building a new world in the here and now. It is another reason why we should resist the return to normality. One benefits of the slow down is that we have more time to cook. Just imagine if we can do this in the absence of social distances. After corona; lets have more of these feasts.
Posted by james debono at 3:07 AM