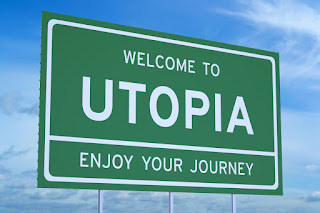 Would it not be great if we do not return back to normal after COVID-19? Would it not be great if we slow down life to enjoy it to the full? Imagine the slow down without the social distancing rules. A world with less cars, less consumerism, less work and more time for ourselves. A world where we can hear birds chirping in the morning and where one can walk at a slower pace without engaging in a dumb rat race. A world where the state fulfills the obligation to insure us from risk and where poverty becomes history. A world where capitalism loses its ability to reproduce itself. Would that not be utopia?
So what would I keep from corona times? On an emotional level its been a pleasant knock out, a puzzle which i am in no rush to entangle, with corona serving as as a delaying tactic. Surely isolation has confined me to a mental and less physical state. Giving flesh to the dreams conjured in the past weeks will be the task ahead. The metaphorical (or real) train will have to depart from this station.
On a work level it simply confirmed that you tend to work more if you work less time. It should be the next great social demand; a reduction of the working time. We need to reclaim time. Our life is too short.
On a political level am less angry, somewhat more lucid and more interested in the aesthetics of rebellion than in letting off steam. In a time dominated by Thanatos (the death instinct), eros (the life instinct) is always bound to rebel. My whole experience has been that of letting go more, not think too much and stop defining things. But old rational me has not gone on holiday. It has given its tacit approval but still watches and observes with interest, and healthy skepticism. It will remain my essential guide, especially in the brave new world after this ends. Otherwise I would lose myself.
But the question remains; is life to be found here or elsewhere? Is the train just a metaphor or is it an indispensable physical bridge to a new life. Is the new life to found in a series of stops in a journey from station to station? And can here and elsewhere meet and merge? Should one travel far away to discover or is that elsewhere found in communities of nomads struggling for change in the here and now? Still that is where aesthetics of rebellion come in to play. For how can eros prevail without rebelling against Thanatos? Isn't elsewhere found in that moment of refusal? The reality is that we live in a state of uncertainty and there is no escape from that, except the certainty of rebellion and saying no.
Posted by james debono at 9:41 AM