There is something about the drag from a factory made cigarette. It is like sucking life from something which gives you death. But that first drag with the morning espresso gives you a shot of life albeit a contaminated one. Still it is only that first one which gives you that sensation, the rest may have their own value when matched to the moment, some insight, a view, pleasure or even an apathetic moment need to be accompanied with a drag... sort of it always accenuates feelings be they of awe or pain...still on those rare occasions when i surpass the 10 cigs limit, they start to taste just as they really are: toxic and unpleasant especially with too much booze. Probably at that stage you start smelling like an ash tray. And worse after years of smoking you could end up smelling like one of those old bars which have absorbed decades of tobacco smoke. Still they form part of the chain which makes that singular sensation of each morning's drag possible. It is that drag which makes it so difficult to stop the habit which gets in to a routine. Surely there are other ingredients which add to the allure. The smoke itself envelopes you in a kind of intimacy and a smoke filled room is always pregnant with great ideas and hopes. It is hard to imagine a revolution being planned in a smoke free room. Yet you don't need a cig for that...vaping was a good substitute in that sense except for that damn first drag and the hard texture of the thing. Guess it is always a good time to quit. But what can substitute the feeling of that first drag? Perhaps it is just one thing one has to simply give up.
Posted by james debono at 8:25 AM No comments:

too lazy to move to studio. typing first blog on my chargimg mobile, with franco battiato's eurovision entry of 3 decades or so ago. that feeling of serenity after cleaning after hosting. that feeling of opening your home to others or even others who were at another home with you. listening to that same playlist you prepared for the little feast...butter, cream, potato and pork ...that sharp culinary divide of olive oil vs butter, beer vs wine, pig vs grain... nordic vs mediterranean but united ina celtic way..so hosting is also a bit like seducing with music and food, you just hope those invited enjoy your choices...much depends on what effort you put in those choices, the ingredients and spices you put im the mix, for it is all an alchemical collision of the universe on our senses, taste buds, smell and vision. that sensation when you enter someone else's home, sometimes disorienting and sometimes welcoming. playlists are also a bit like a home, an accumulation of tastes influenced by guests who stayed and left a bit of themselves. for we always leave traces of ourselves everywhere, that is after all the purpose of life, to leave traces of our lives in others and hope that those traces made their life more beatiful at least in an ephemeral way.
Posted by james debono at 3:59 PM No comments:

Reality has a habit of setting in and anchoring us in new realities.  One may compare life with a novel full of bizarre twists but one which is to a variable degree interactive like those TV shows where the viewer is invited to make choices for the characters in the plot.  But although the novel may be writing itself-relegating some events to footnotes and elevating others to new chapters,  in doing so it creates material realities.  But even as the novel unfolds, there is always the resistance of very material characters; in their daily procrastination, detachments and inertia, with the resulting feeling of melancholy reflecting the pleasant tension between what actually exists, what cannot exist and what can potentially and easily exist but which we can postpone or even evade or let slip away.  Ultimately there are always choices but  also the freedom to refuse to choose. Cause while freedom is all about choice, it also entails not choosing between things which are already defined for us in the scripts of already written plots and novels.  In this sense one may choose to subvert the plot through inaction, procrastination and basking in lethargic futility.  The freedom not to go anywhere.  The freedom of having no goal.  The freedom to collect memories and things for the sake of it.  The freedom to be nomadic and go round in circles.
Posted by james debono at 7:53 AM No comments: 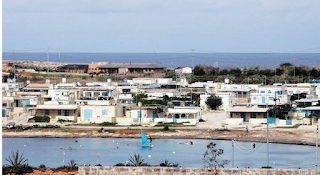 My search for the Maltese word which captures the national popular mood as amplified by the summer haze had started with an exploration of the word affan which I described as a kind of intellectual lethargy and an aversion to thinking  rooted in a colonial psyche and lack of historical roots. For while history is everywhere, the connection between past and present is tenuous, resulting in a rootless culture.
This lethargy does not  evoke a relaxed late back mediterranean joy of living but is expressed in road rage, blasting petards in to the sky, appropriating and carving public spaces and in some cases a savage ethic of individual greed and a rejection of silence.
Still this is not a full picture.  Even in the self appropriated boat house shanty towns and the contested beaches one finds a slower pace of life and a surrender to the overwhelming heat. A state of mind  more conducive to a slower pace of living, which leads me to hedla, a beautiful Maltese word, which is evocative of the mental and physical abandonment after a long day at the beach, which is akin to smoking pot or the silence after a moment of passion.
Hedla has the potential for post colonial emancipation, a rediscovery of mediterranean identities, a liberation from collective sexual guilt and a rejection of the ethic of self appropriation, a much needed slow down in a country whose soul has been corrupted by rampant neo-liberalism.  Hedla may not evoke rebellion but it does contain the seeds of a different way of living in greater harmony with nature and stronger roots in local communities.
Posted by james debono at 3:31 AM No comments: