Sisyphus in the multiverse 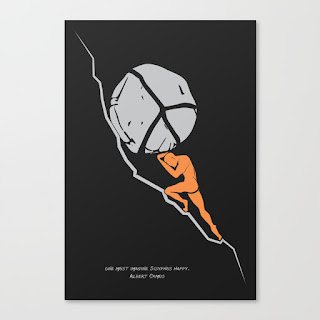 One of the most fascinating scientific theories is that there exists an infinity of universes in which our lives are played out in an infinity of different ways. So there is an infinity of us doing the same things but slightly or significantly differently. Or perhaps not even doing the same things. This begs the question can you slip from one universe to another?
Can it happen willfully or does it happen randomly? Probably it simply can't happen as parallel lines can never meet. That is one thought which often took me somewhere else during maths lessons in secondary school.
What if one were to follow two parallel lines for eternity? Would some twist or incident change their inevitable destiny of not meeting? But just imagine the frustration of spending eternity waiting for the impossible to happen. It is a sensation which I sometimes encounter in my dreams. For although more often than not I tend to forget my dreams, apart from a few recollection of faces, that overwhelming sensation of hope being dashed by the realm of possibility is familiar. Yet it does come with recollections of defiance. Sure enough choosing between defiance and submission to fate, is one of the greatest dilemmas. For both are essential ingredients of our humanity.
That may be why the myth of Sisyphus has always struck me as the one best representing the human condition. Sisyphus submitted to his fate by rolling the boulder up the mountain for an infinity of times. But he remained defiant by never losing hope that one day he would manage to reach the mountain peak and complete the task which would set him free. In this way he fulfilled the will of the Gods but still defied them by remaining hopeful. And is there not a greater chance if the number of universes is infinite that in at least one universe Sisyphus has triumphed?
Moreover although one may safely conclude that there is no means to slip from this reality to another,there are significant moments when it really does feel as if our reality is being pulled by an invisible force which can thwart but also create possibilities and sometimes doing both with a twist of cosmic irony. But probably this sounds more like some metaphysical justification for entirely personal choices. In the end the randomness of it all, simply confirms my hunch that it is all about coincidence. Life is chaotic. Nothing happens for a reason. Our only freedom is to defy, rebel and create even if we can at any time be blown away by forces which we cannot control. We are after all insignificant beings living in a small fraction of the known universe, possibly one of an infinity of universes. Yet the desire to take control and bring some order to chaos is also a part of our humanity. That is why we still have a duty to resist injustice and create beauty despite the futility of it all.
Posted by james debono at 3:34 AM