Imagination in the times of corona 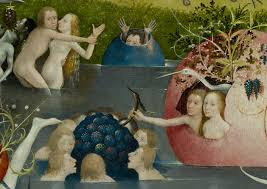 In times of collective anxiety, we still have the freedom to imagine. I would even add that the grim atmosphere around us may well free our imagination from the restraints of routine, perhaps at the risk of becoming delusional but possibly more whimsical. Let's not forget that the most evocative images of gluttony: of rivers of wine, fences of sausages, roofs of bacon and plump geese rotating by themselves to roast in the streets, were invoked in times of hunger when feeling satiated was an uncommon luxury. Restrained conviviality may well offer us the opportunity to imagine utopia, a new imaginary of living together.

For in the realm of the imaginary everything is possible and plausible. This is the best antidote to anxiety about things we cannot control in the unpredictable world around us. In the realm of imagination even the grim and the macabre and the bizarre may take enchanting and playful forms.

Unfortunately in a time of fear it is natural for many of us to obsess about something which escapes our control. It is the kind of loss of control which renders us powerless in the face of an unpredictable phenomenon which we are still struggling to understand.

Added to this is real concern about the future, especially among those who have lost their jobs, those who were treated like disposable objects after being used in the times of plenty and who are now faced with paying exorbitant rents or being kicked out of the country.

We should also pause and think of how the sick and elderly feel when some of us casually repeat the offensive mantra that "only the vulnerable" will die. These people have every reason to worry. For the irresponsibility of others can kill them.

But even for the sake of the surplus populations living in our midst, imagining a world where everyone has the same protection against the vagaries of 'disaster capitalism', is a duty. We need to imagine a society where collective risk is socialised, rather than one which insures those who have made enough profits to live for another day.

But there is also a personal dimension to life in the time of corona.

For being isolated in our homes is an opportunity to transform and appreciate our small islands in all their complexities, while doing small acts of kindness. Unfortunately some will also be locked up with their oppressors and abusers, a stark reminder on the need of support structures in our communities, especially in testing times.

Isolation also gives us the chance to measure the distance between our own imaginary and the real, possibly encouraging us to make a resolution to reduce that distance. It is also an opportunity for longing for elsewhere, a process which in itself can be futile but rewarding at the same time, at least if it triggers our imagination or helps us becoming better people.

Fear also offers the opportunity for embracing the dark side which we tend to relegate or exorcise instead of conjuring it for play, homor and enchantment. Edgar Allan Poe's stories for children come to mind.

In the meantime hope needs to be nourished with imagination and books. For after the plague it will be the time to feast; hopefully not a feast of consumerism but one of renewed conviviality.